Current: Reverend Christopher Ian Chenoweth founded Positive Christianity in an internet format since 1999. This ministry has become highly successful serving well over 2 million people daily of every faith. His “Positive Daily Inspiration” is highly regarded and praised for its uplifting writing style. His weekly “Written Sermons” serve over 2000 ministers of all church denominations worldwide. Three television ministries go around the world and are featured on different networks in South America and Africa.

Our success has been our copyright. You have the right to copy ANYTHING. Our inspiration is from God, and God shares freely.

He has authored two books: Positive Living and Day by Day. His best selling Positive Daily Inspiration tear-off calendar can be found being used in offices and homes everywhere. His Gratitude to God system has changed many lives. His hour-long Prayer downloads are very powerful and unique to this one spiritual work.

Positive Christianity receives as many as 1500 new prayer requests a day. Our prayer teams are located in the United States, Canada, Mexico, UK, France, and Spain. 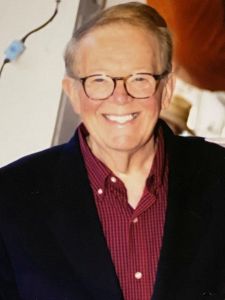 1987 – 1998: He served for eleven years as the Senior Minister of World Headquarters of Unity School of Christianity at the Unity Village Chapel.

His ministry included four weekly services, a major unity radio broadcast on CBS Radio, Kansas City, a worldwide net cast, Unity short-wave programs to Europe, a nationwide audio and video tape ministry as well as a written transcript service that provided lessons and meditations to one half of the Unity Churches across America.

He also provided instruction on prayer to Unity Ministerial Students as well as Silent Unity Workers.

He authored numerous articles that have appeared in a variety of Unity publications. He has been a frequent contributor to the Daily Word and Unity Magazine as well as other national publications.

1984: Founder of “Positive Christianity” in newspaper format, a non-profit, non-denominational ministry. Publisher of “The Good Life” newspaper (circulation by 1987 – 105,000).

Prior to ministry: he was on radio (and some television) – last in Nashville Tennessee. He often jokes he was in country before Country Music was cool. It was called Hillbilly Music, and few gave it a second look other than to put it down. He hosted his own Country music radio show from age 16 in Baltimore Maryland. He would often be sent out of the studio to do live events training him for the future with live audiences. (He also worked in Big Band music format in Nashville.)

In the 1970s riding in a parade in Kentucky with the governor of Kentucky he was made an honorary Kentucky Colonel by the governor.

Presently: Resides in Conroe, Texas (Houston) and has two grown children, and one grandchild. He spends his leisure time traveling. He also enjoys motorcycling and exploring the history, natural beauty and local character of his travel destinations.

Dear God, I will make the most out of every SINGLE day by giving myself in total to you. I pray that no one will ever come to me without leaving better or happier. I will allow you, God, to come through me, and use me for your glory, and not my own. Help me to be a living expression of your divine joy, kindness, and love. I will strive to be the prayer connecting link between the doubt in people, and the all of God, the unhappiness, and the joy of God, the sickness, and the health of God, the poverty, and the wealth of God and the confusion, and the clear guidance of God. I will pray without doubt, with certainty thinking because I know nothing is impossible with God. I choose a life of service to people no matter what their religious faith or background. I will give of myself freely knowing you will support my every need. I pray, that when I pray with another person, your words, energy and light will touch the other person in such a way that a lasting, positive change takes place during the prayer. God use me, think through me, speak through me, pray through me so that I may help with the highest possible help on earth. I will live my life to manifest the Christ in me. I will live a harmless, gentle, joy-filled life. I will uplift humanity by giving prayer, hope, joy, and love to at least one person every day of my life. In Jesus Christ’s name, I pray.